I recently initiated a small position in this provider of in-home ventilation assistance for patients with end stage respiratory disease. 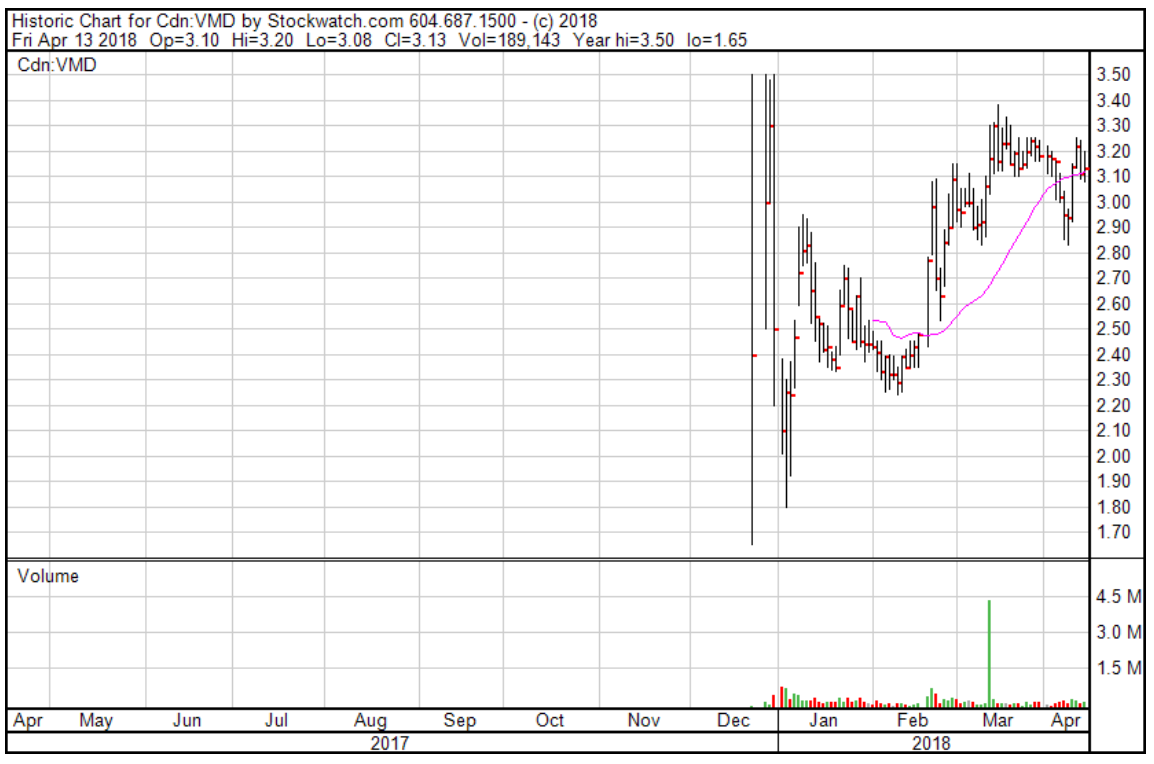 (This company reports its results in US dollars. All the numbers below are in USD and I have converted the current share price of $3.13 CDN to $2.48 USD at an exchange rate of 1.26 for proper comparison purposes.)

Viemed Healthcare was recently spun out from another publicly traded company called Patient Home Monitoring (PHM). PHM came on the scene in 2014 with the intention of consolidating the fragmented home health care industry in the United States. Initially, they were enthusiastically supported by investors and raised a large pile of money that they used to complete a flurry of acquisitions in the home healthcare space. Unfortunately, as often happens, these acquisitions did not all go according to plan. The company struggled to turn a profit on its growing stable of companies and investor support faded. The stock price slumped, and management was forced to re-think its strategy.

In late 2017, they decided to spin out their most profitable Viemed division as a separate company to unlock the value that was being obscured by some of their other money-losing divisions.

Viemed Healthcare is a rapidly growing provider of in-home respiratory services. Their first predecessor company was founded in 2006 to provide CPAP (continuous positive airway pressure) machines to patients suffering from sleep apnea and portable home oxygen equipment to other respiratory patients. Then in 2012, they started offering non-invasive ventilation (NIV) services for relief of breathlessness symptoms in patients with severe COPD (chronic obstructive pulmonary disease). This new treatment modality has proven popular and sales have grown dramatically over the past 5 years. COPD is primarily a disease of the elderly and so it’s incidence is likely to grow over the next two decades as the population ages. 25 million people in the US currently have COPD and 1.25 million of those have symptoms that are severe enough to warrant non-invasive ventilation. According to Viemed, only 5% of those actually receive NIV, resulting in a still large, untapped market for this service.

At-home, non-invasive ventilation first started to be used in a significant way in 2012 when the manufacturers of the machines came out with a cost-effective model that could be used in the patient’s home. The ventilator provides a positive pressure flow of air that the patient inhales through a mask. The patient can use this supplemental breathing assistance when they feel particularly short of breath. 93% of patients report feeling symptomatic improvement after starting NIV. Despite this, its use still remains somewhat controversial. While Viemed has been able to show that their program significantly reduces hospital re-admissions and thus ultimately saves the system money, there is not a consensus in the medical community that using non-invasive ventilation actually reduces mortality. However, Viemed has been actively reviewing its own growing database of patient outcomes and has found that patients are 3 times more likely to pass away within 90 days after a chronic respiratory failure diagnosis if they are not offered non-invasive ventilation. They also report that Viemed patients have a 5.7% re-admission rate which is significantly less than the 20% industry average re-admission rate and they believe that this generates approximately $30,000 in annual savings to the healthcare system per patient.

Viemed has a team of respiratory therapists who consult in-hospital and design the at-home care plan. They provide in-home visits and support and can be reached by phone 24/7. Additionally, Viemed retains a staff of experienced pulmonologists on staff that are available for telemedicine support. Viemed provides the necessary ventilator machines and bills Medicare/Medicaid for the service. Their therapists operate out of their vehicles, thereby cutting down on expensive fixed retail store costs.

Viemed says that they are only using the ventilators in patients with a clear, documented need but nonetheless, they are vulnerable to a change in billing guidelines from Medicare which is where most of their reimbursement comes from. In early 2016, the monthly rate they were allowed to bill to Medicare was cut significantly and as a result, Viemed’s sales and earnings dropped precipitously. Through continued rapid growth in the number of patients being served, they have managed to regain the ground they lost but they remain vulnerable to further reductions in the reimbursement rate or even a complete elimination of the service code altogether. In the most recent set of financial results, accounts receivable had climbed because Medicare was holding back payment pending an audit of Viemed’s billing practices. While management seems confidant that this audit will go smoothly and that their rate of billing denials will be minimal, this is clearly one of the chief risk factors facing this company.

From a standing start in 2012 when they recorded revenues of $4.7 million, the company has grown rapidly by adding new therapists to their network and signing on new patients. They now have a staff of 220, servicing 12,000 patients in 24 states and in 2017 they recorded annual revenues of $47 million. Sales and earnings took a big hit in 2016 when medicare dropped its reimbursement rate for in-home ventilation. Sales dropped from $38 million down to $31 million and profits dropped to essentially zero. However, they have managed to recover from this setback and in 2017 sales grew by a blistering 49% to hit a new record and they recorded earnings before tax of $8.5 million or 22.5 cents per share.

Their outlook for 2018 is positive with expectations of continued sales and earnings growth as they continue to add new respiratory therapists to their network and enroll new patients to their service. While they have larger competitors that also offer the same non-invasive ventilation service, they say there is still plenty of “low hanging fruit” in the sector in the form of patients and markets that are not currently being served. They don’t see a great deal of merit in pursuing an acquisition-led growth strategy because of the rapid turnover in their client base. (Unfortunately, they are dealing with very sick individuals with end-stage disease. They can take solace from the hope that they are making the last months of these patient’s lives better, but spending money to acquire another therapist’s patient clientele is likely not to be money well spent.) Instead, their plan is to grow organically, which hopefully will mean little in the way of share dilution. With a presence in only 24 states, there is plenty of room to expand their therapist network. As well, they are actively purchasing their own stock of ventilator equipment that they can then rent out at higher margins to their clientele. And finally, they are looking at opportunities in the pediatric sector where in-home respiratory services are required on a more long-term, ongoing basis.

While the use of this new treatment modality is still controversial (it can be easy to abuse the billing code by offering the service to patients with milder disease who may not get as clear a benefit from it), it nonetheless plays into the trend towards increasing home-based healthcare solutions to offset the high costs of in-hospital care. Viemed is actively working with insurance companies to develop an economic use-case plan that will support more third party billing and remove their dependency on government supported Medicare payments.

Viemed is a rapidly growing company and I believe merits the designation of “high flyer”, with sales up nearly 50% in 2017 and all indications being that this strong rate of growth can continue as new territories are added to their network and new patients are introduced to their services. In a normal market, this would mean I would expect the market to be pricing it at around 20 times earnings. However, in this market, where even “perfectly average” companies are selling for close to that, a good high growth story can merit a p:e of 30 or more. With 2017 EPS of 22.5 c, this company sports a p:e ratio of 11, almost a third of what you might expect.

The company has a large “tax shield” in the form of previously accumulated tax loss carryforwards that it can use to reduce future tax bills. In 2017, it paid no tax, thanks to these carryforwards. The company says it expects to pay minimal taxes going forward until this tax shield is used up. With $58 million in tax loss carryforwards vs. 2017 pre-tax earnings of $8.8 million, this will hopefully shelter them from taxes for a number of years to come. This is a potentially large “hidden asset” that does not show up on the balance sheet and if they can make full use of it, on its own would be worth more than half of the current market cap. Because of this tax sheltering, I am using pre-tax earnings as the basis for my p:e ratio. By the time they have used up these carryforwards, my hope is that earnings will have grown significantly.

Net debt levels are quite modest at less than 1 times annual earnings.

If this was where the story ended, this would be a “back up the truck” and load up kind of story. A high growth company in an underserved market in the recession resistant healthcare field with a strong demographic tailwind behind it, trading at a p:e ratio that is less than half of what you would normally expect to pay. What’s not to like?

Unfortunately, that is not where the story ends. This company is almost completely reliant on a single Medicare billing code for a treatment modality that remains somewhat controversial and can be open to abuse. They are currently undergoing a Medicare audit and while they appear to be confidant that their rate of claim denials will be minimal, they remain very vulnerable to future changes in the reimbursement rate for NIV services.

This fact alone almost led me to take a pass on this investment. I waffled back and forth for an unusually long time on this particular purchase and in the end decided to commit only 1/3 of the funds that I usually do to a new idea. While I think the story has great potential, there is also an unusually large risk that you could lose your entire investment with the single stroke of a regulator’s pen.

Some of my best investments have been the ones that I felt the most uncomfortable buying. So while I am establishing a position in this company with some trepidation, I also see many reasons for optimism. In the end, as the saying goes, “you pays your money and you takes your chances.”

Full disclosure: I own shares in this company.