After careful consideration, I bought back into Essential Energy Services after abandoning it only a few months earlier. The valuation was simply too low to ignore. 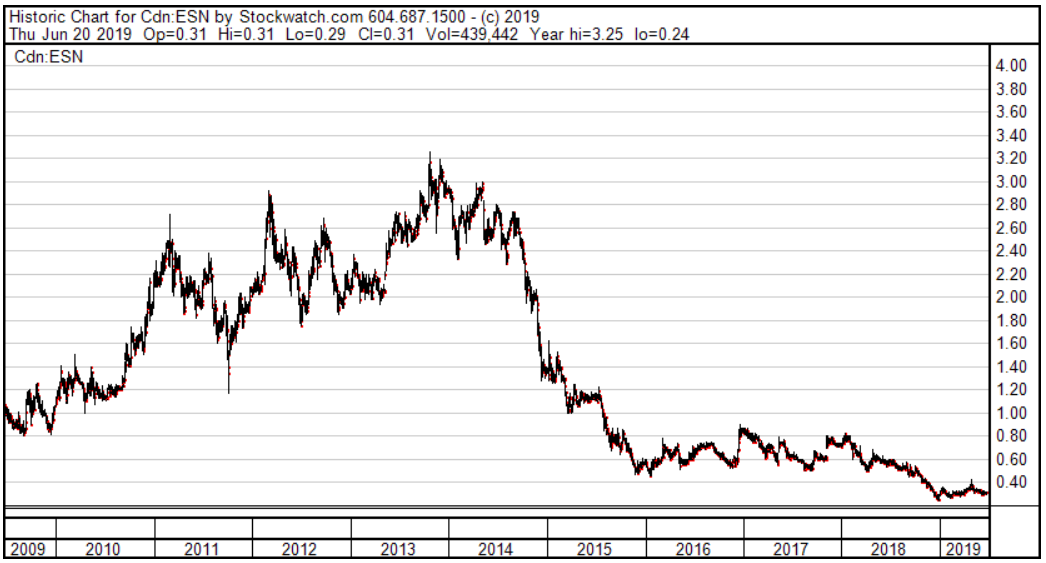 From Over-Exposed To Under-Exposed

Back in February, I took a look at the deteriorating landscape in western Canada for the oil and gas industry and decided to jettison two of my oil and gas holdings that had heavy exposure to the western Canadian sedimentary basin. Essential Energy Services and Macro Enterprises were the victims of this purge. At the time, I was feeling a little over-exposed to the highly uncertain outlook for the oil and gas industry with 4 of my portfolio holdings focused on this sector. Lightening up seemed to make some sense. However, as the winter progressed, the prices of my two remaining oil and gas plays, Questor Technology and PHX Energy Services marched higher and I ended up selling these too at what I felt were attractive prices.

Which was all well and good, but it left a noticeable gap in the portfolio. Over the years, I’ve owned a number of oil and gas service stocks. The repeated boom and bust nature of this industry has proven to be a fertile hunting ground for attractively priced, turnaround candidates. After the sale of PHX Energy Services, as I surveyed the portfolio, I was feeling uncomfortable with the complete lack of any direct exposure to this beaten down sector.

As Baron Rothschild famously said, “the time to buy is when there is blood in the streets”. Calgary is knee deep in the stuff right now. It’s hard to imagine a worse outlook for Canadian oil and gas. The world seems to be rushing headlong into a more electrified future. Unsubsidized solar and wind power are now cheaper in some areas than fossil fuel generated power. Costs continue to drop and we may well be in the early innings of a dramatic explosion in renewable energy production capacity. Even more importantly, the coming transition to electric vehicles is likely to take a huge chunk out of worldwide oil demand. Toyota recently predicted that half of all its auto sales in 2030 would be electric vehicles. That’s a stunning projection from one of the world’s largest auto makers.

Throw in a weak global economic outlook sapping demand further and you have the recipe for a massively disruptive transformation of our energy infrastructure. Great news for the environment, bad news for oil and gas service companies!

To make matters worse, the Canadian outlook is particularly grim. We simply don’t have the pipeline capacity we need to transport our oil and gas out of the country. Until this issue is resolved (and it may never be) it seems like there is little incentive to drill for new deposits in western Canada.

And yet, there is that whole blood in the streets thing. Yes, the outlook looks grim for these companies. But the oil and gas industry is not going to disappear tomorrow. Change takes time and there may still be an opportunity for some of the best run or best positioned companies to make some profits in the sunset years of the fossil fuel age.

There is a lot of ink spilled debating the future direction of the price of oil. Very intelligent arguments can be made for both the upside and the downside. I don’t have a strong conviction as to which side will ultimately be proven right. What I do believe though, is that after 5 long years of depressed oil prices, investment in new oil and gas production around the world has likely been lacking. 5 years of depressed prices will do that. Ignoring for the time being the somewhat manic fracking that still seems to be going on south of the border, the global picture could be one of reduced exploration, diminishing reserves and under-investment in new capacity. At some point, the pendulum may swing. If continued demand for oil and gas collides with reduced capacity, this could eventually provide the seeds for the next mini boom in exploration and drilling as companies scramble to replace their lost reserves. This could run head-on into a drilling service industry that has been decimated, and a lack of service infrastructure could send day rates sky-rocketing.

The same boom-bust cycle that plays out in the resource sector time and time again could well play out again even if the next boom is more muted than the previous ones and takes longer to materialise.

For this reason, I’d like to have at least a toehold in the sector. With the recent sale of PHX Energy Services, I had no direct exposure to oil and gas whatsoever, so I went looking for some.

I feel much more comfortable investing in the service companies than I do in the actual production companies or the exploration plays, so this is the sector that I focused on.

Picking Through The Wreckage

In the depressed state that the industry is in right now, profits are hard to come by. Most service companies are losing money, or at best, breaking even. Many are loaded down with too much debt, a hangover from the boom years when companies were emboldened to leverage up their balance sheet. What’s more, companies have often been forced to issue additional shares to support their money-losing operations, significantly diluting existing shareholders.

With these negatives in mind, I went looking for at least one service stock to add back into the portfolio. I was looking for a company that had been solidly profitable before the downturn in 2014. Obviously, the current share price had to be very low compared to these previous peak profits as I have no great faith that this level of profitability will actually return. (Although it could.) I also wanted a company that wasn’t losing too much money in the currently depressed environment. I don’t know how long this downturn might drag on. If the company in question is hemorrhaging money and we are still a few years away from a recovery, then that is a sure-fire path to bankruptcy court. I wanted a company with a modest amount of debt. Again, I need a business that I think can hang on for the long haul. If I could find a company that met all these criteria and if I could buy it at a steep enough discount to the value of its hard, tangible assets then I could let myself be persuaded to tiptoe my way back into the sector.

I put together a list of 24 Canadian companies in the oil and gas sector. After sorting and ranking them, I was chagrined to see that the company that made it to the top of my list was none other than the Essential Energy Services that I had abandoned a few months earlier.

The Least Dirty Shirt In The Pile

Essential Energy Services is a Canadian company that owns and operates one of Canada’s largest fleet of coiled tubing drilling rigs and nitrogen and fluid pumpers. This equipment is used for the kind of long-reach vertical and horizontal wells that the industry needs to use these days to get at the remaining, difficult to reach, oil and gas deposits. The company also has a division which rents out downhole tools to drillers and has been having some success expanding these rental operations south of the border. Their business is split roughly 50/50 between these two divisions.

In my recent survey, the numbers were pointing me back towards this company as the least dirty shirt in the pile. It ticked a lot of the boxes. The company was making good money before the price of oil took a nosedive. Earnings averaged around 20 cents per share in the boom years. Granted, the company has issued a few more shares since then so the equivalent per share number would be closer to 18 c today. At the current share price, that gives the stock a p:pe ratio (price to peak earnings) of 1.7. As I stated earlier, I’m not expecting profits to fully recover to their previous peak but then again, in the right circumstances, that’s not out of the question.

In 2016, at the bottom of this down cycle, the company lost a fair bit of money. But they managed to right-size their operations quite effectively to deal with the harsh new reality of depressed oil prices. They idled drilling rigs, laid off surplus oilfield workers and cut costs wherever they could. For the last two years, the company has been close to break even.

Essential has a much better debt profile than many of its peers. They weren’t nearly as heavily leveraged going into the downturn and between issuing a modest number of new shares and harvesting some free cash flow from operations, they have managed to keep their debt levels well in check. At the moment, the company has a very manageable debt load of about $12 million or 8 cents per share, which looks good against tangible book value of over $1 per share.

It’s that tangible book value and, more precisely, the large discount to that number that the stock is currently trading at, that brought this stock to the top of my list. Of the 24 service stocks that I looked at, Essential had one of the lowest p:b ratios. The stock is now trading at a mere 0.3 times book value. This book value is mostly made up of drilling rigs and their inventory of downhole rental tools. At the current share price, you can buy this equipment for roughly 30 cents on the dollar.

Is that enough of a discount to offset all of the many negatives that darken the future outlook for the oil and gas industry in Canada? I don’t know. Possibly not. But there is definitely the potential here for some outstanding share price performance in the right set of circumstances. The numbers set you up for a possible multi-bagger if the future is perhaps not quite as dire as it looks for Canadian oil and gas. Perhaps pipelines out of western Canada will actually get built someday. Perhaps Alberta’s investment in additional railcars will provide enough additional demand to get companies drilling again. Perhaps the new LNG terminal being built in BC will kick-start a mini boom in natural gas exploration and drilling. Perhaps Essential will manage to build on its operations in the relatively more robust US industry. Perhaps international conflict will cause a spike in the price of oil or re-draw the energy map to favour more NA production. Perhaps renewable energy and electric car adoption will hit snags along the way (such as a shortage in the availability of key battery minerals) that will delay their development. Perhaps some unidentified other thing will happen.

Trading at a third of its tangible book value and less than 2 times its previous peak earnings, with a strong balance sheet and operations that are currently close to break even, even in this harsh industry environment, I have had a change of heart when it comes to Essential Energy Services and decided to give the stock another chance. I recently added it back into my portfolio.