Why I think this company might have what it takes to survive the retail apocalypse. 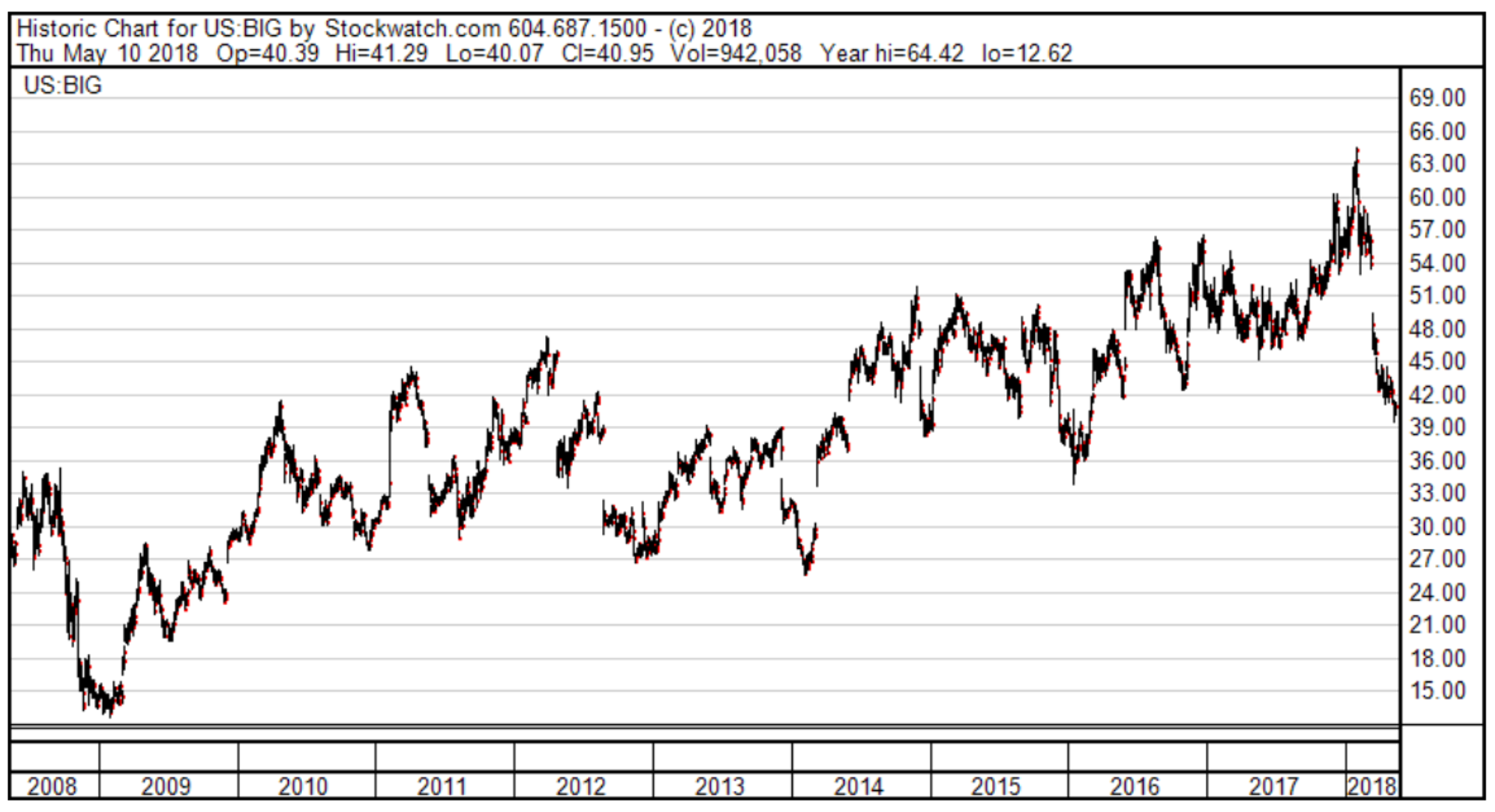 (This company is an American company, listed on the New York Stock Exchange. All numbers reported here are in US dollars.)

South of the border, they’re calling it the retail apocalypse. Malls are shutting down, stores are closing, entire chains are going out of business and consumers just aren’t spending the way they used to. Mall visits declined by a whopping 50% between 2010 and 2013 with further declines in the years since. Of the 1200 shopping malls in the US, 50% are expected to close their doors by 2023. More than 12,000 stores are expected to close in 2018 alone. (I’m getting all this from Wikipedia.)

There are a lot of theories about why retailers are doing so poorly. Likely it is a confluence of many factors, all combining to produce that “perfect storm” cliché. For one, the industry built too many stores. The U.S. has 23.5 square feet of retail space per capita compared to 16.4 in Canada and 11.1 in Australia, the next two most heavily retailed countries. The growth in the number of stores from 1970 to 2015 was double the rate of population growth. Combine this with an aging demographic that has already bought a lot of the stuff they need. As the baby boomers head into their 60’s, they are spending less on consumer goods. Then there is the disruptive effect of a rapidly evolving move towards e-commerce and the relentless drive from Amazon to worm its way into every corner of the retail landscape. The hollowing out of the middle class likely plays a role as well, as does the economy’s long, slow and halting recovery from the great financial crisis.

Put it all together and what’s happening in old school, brick and mortar retail isn’t very pretty. So naturally, I went looking for opportunities in this beaten down sector.

The company I came up with is called Big Lots. They operate 1416 big box, discount, general merchandise stores spread across the United States. Furniture is their biggest department, followed by food and consumables. They also do a brisk business in seasonal and outdoor products. About a quarter of their total revenue comes from close-out merchandise. These are products they’ve sourced from lines that are being discontinued or companies that are going out of business. They think this close-out inventory helps to differentiate them from the competition and drive increased store traffic.

They have been running their business in a very conservative fashion. Instead of recklessly expanding, they have kept their store count very stable for the last number of years, even shrinking their footprint where they see opportunities to close down under-performing locations. Instead of using their profits to grow the business, they have been buying back their shares on the public markets. From 2010 to the present, the number of shares outstanding has dropped almost in half. As a result, while sales and absolute earnings have stayed relatively constant, earnings per share have almost doubled.

This business discipline may have protected them so far from the worst of the retail apocalypse. As well, there are other aspects of their business that I see as positives in this harsh environment. They are a discount brand and when times get tough, they likely benefit from consumers moving down market. Looking back at their performance during the last recession, earnings stayed robust throughout. If we are in the late stages of this economic cycle, I would keep my fingers crossed for a potential repeat of this resilient performance. Since close-out merchandise is a major component of their business, the struggles in their industry could actually end up benefitting them with a steady stream of new, discounted merchandise. Their focus on furniture and food also could be a positive as these two sectors seem to be less susceptible to pillaging by Amazon and other e-commerce vendors. New household formation by the millennials could drive continued demand for their furniture and home products in the years to come. And finally, I was happy to see that they lease nearly all of their stores, often on 5-year terms. If the retail real estate sector is imploding, that should mean better rental rates when it comes time to renew those leases.

Below are graphs of sales and earnings over the past 12 years, first on an absolute basis and then on a “per share” basis. 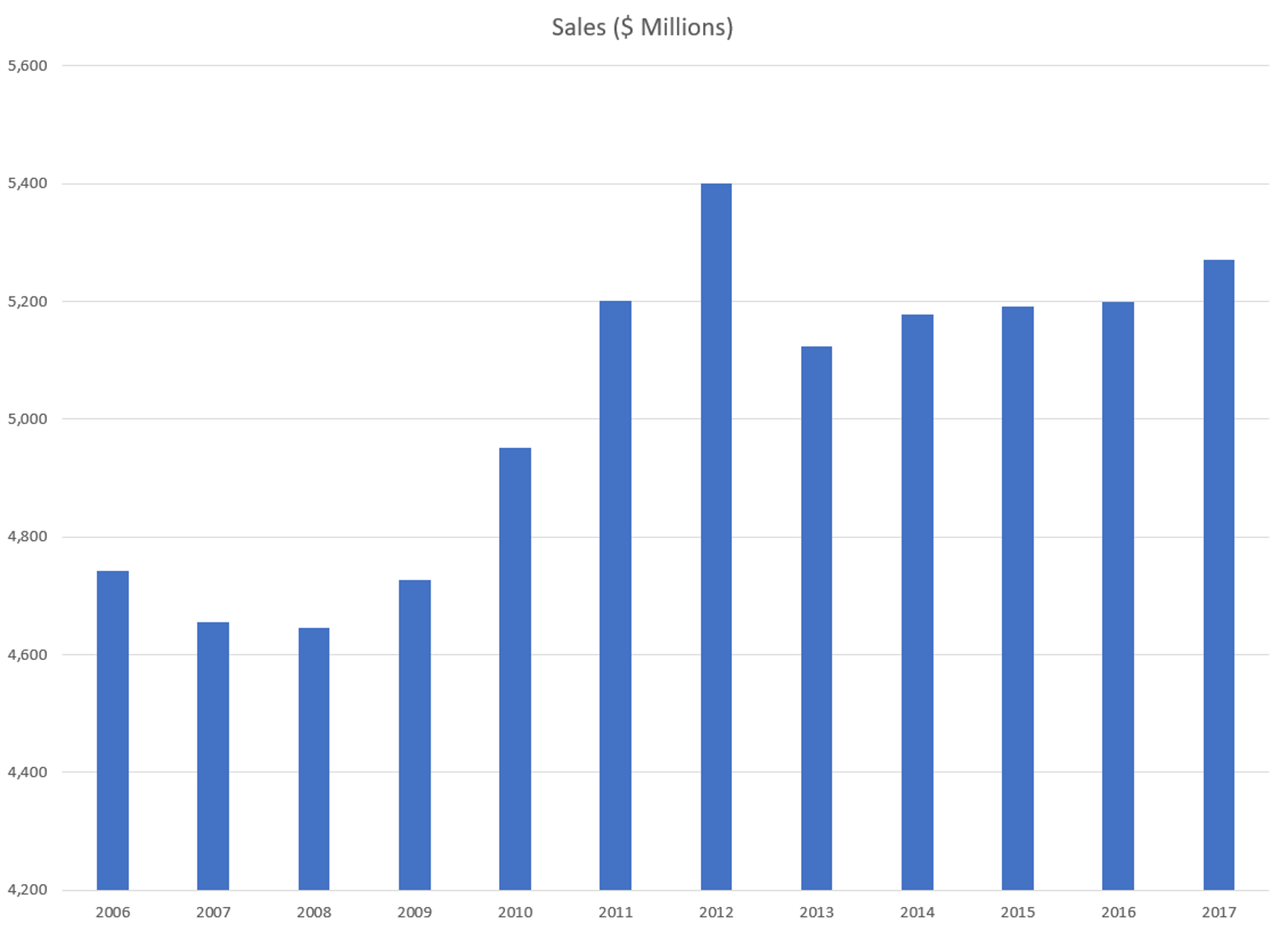 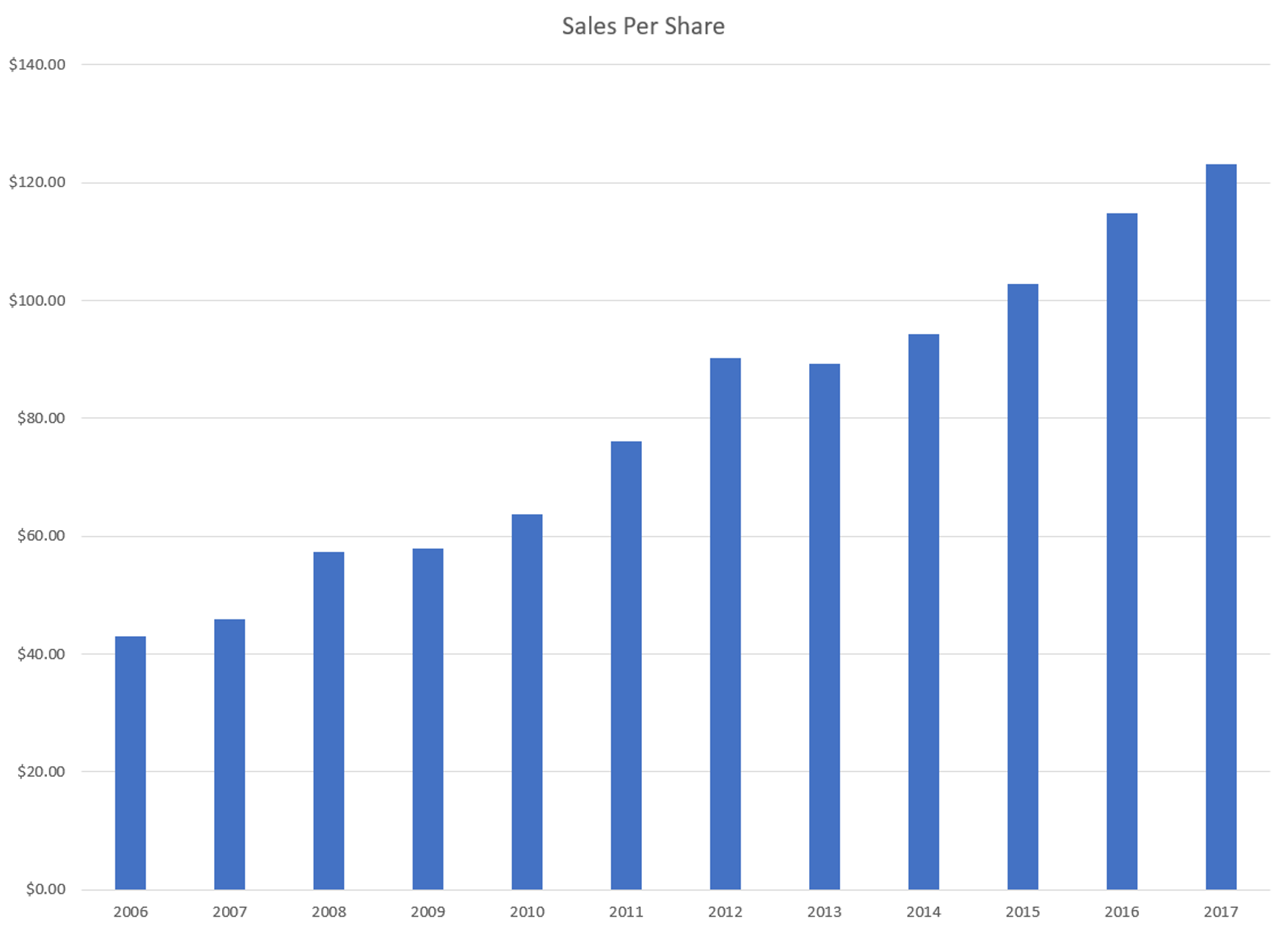 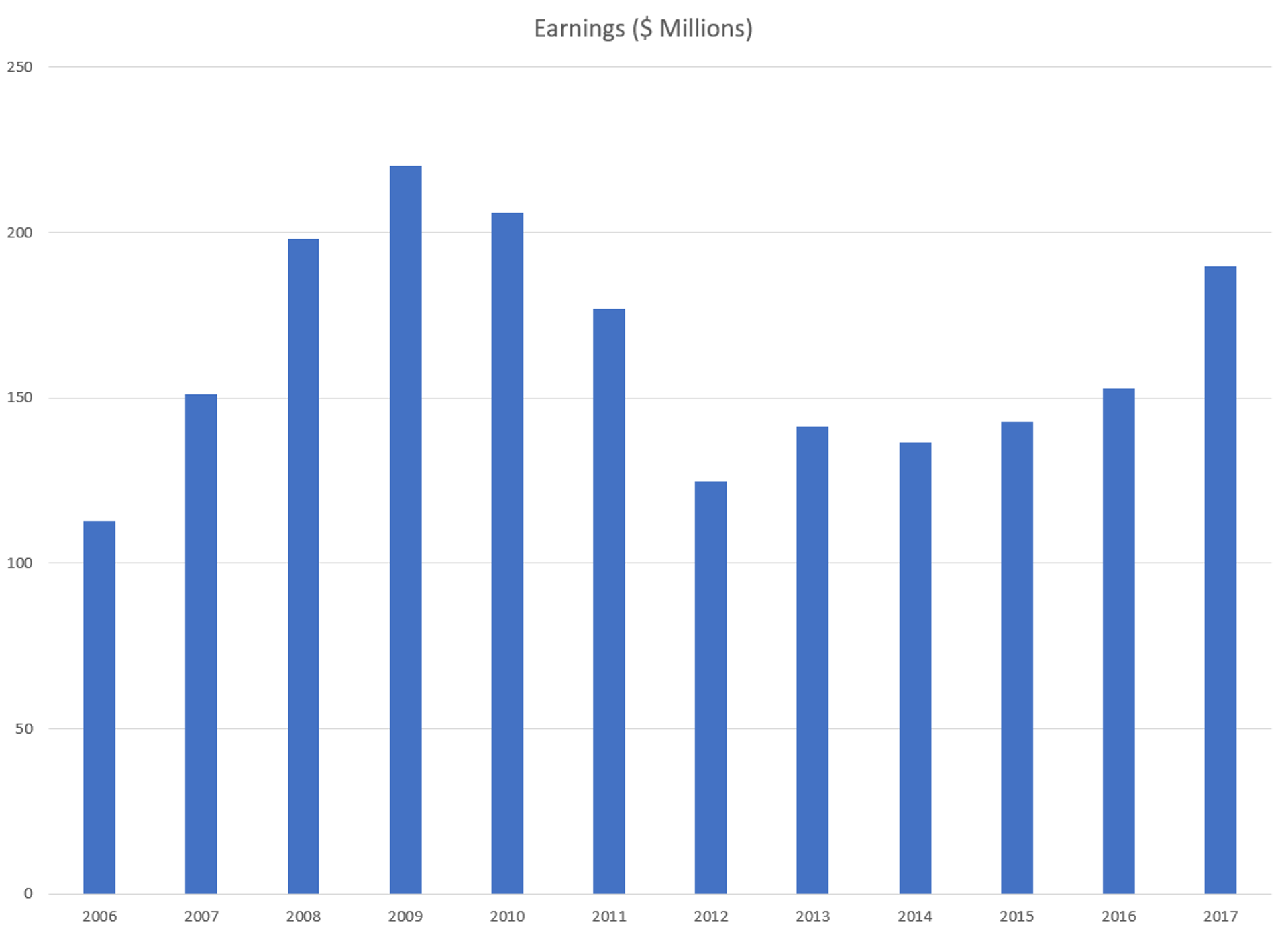 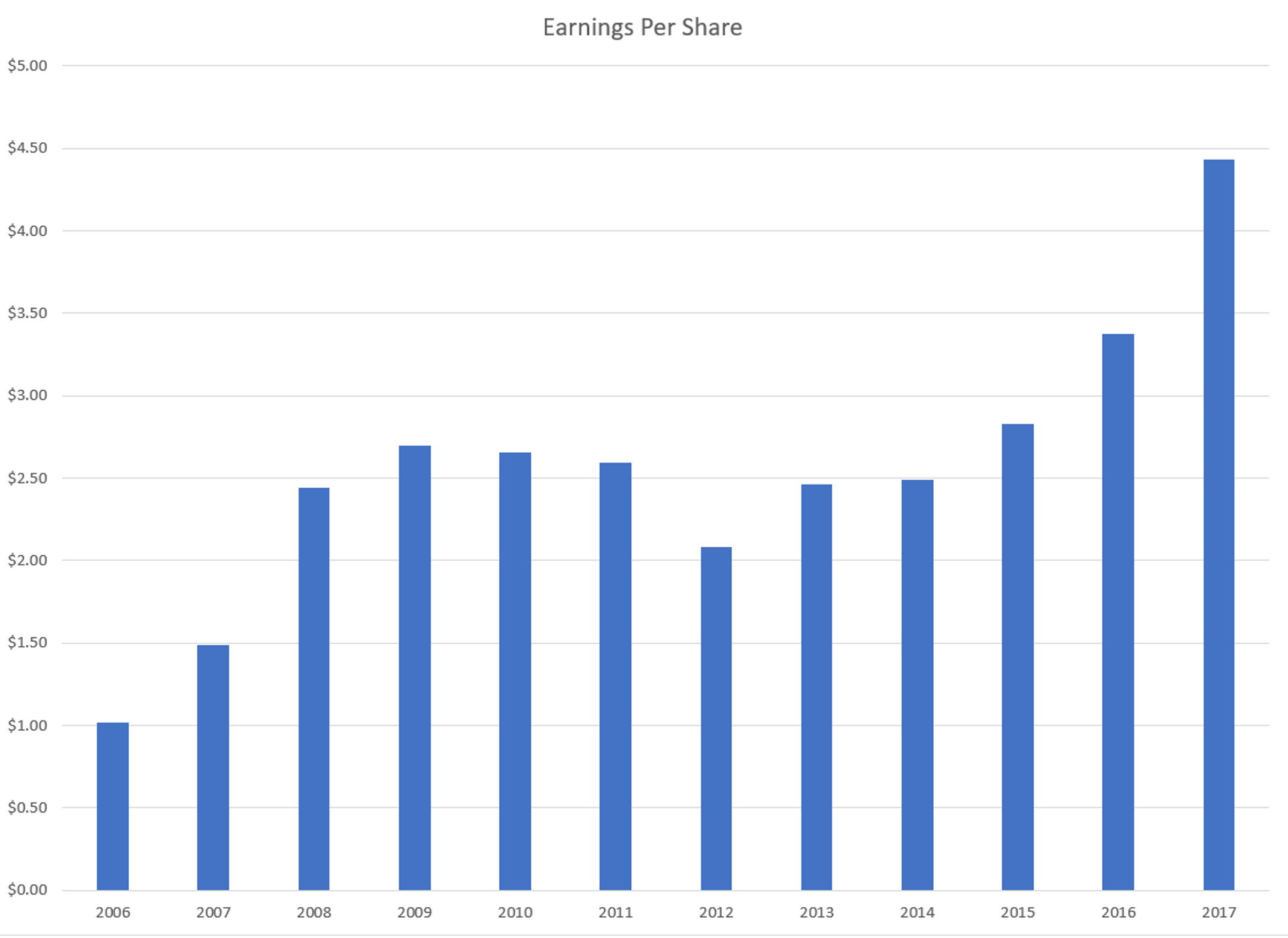 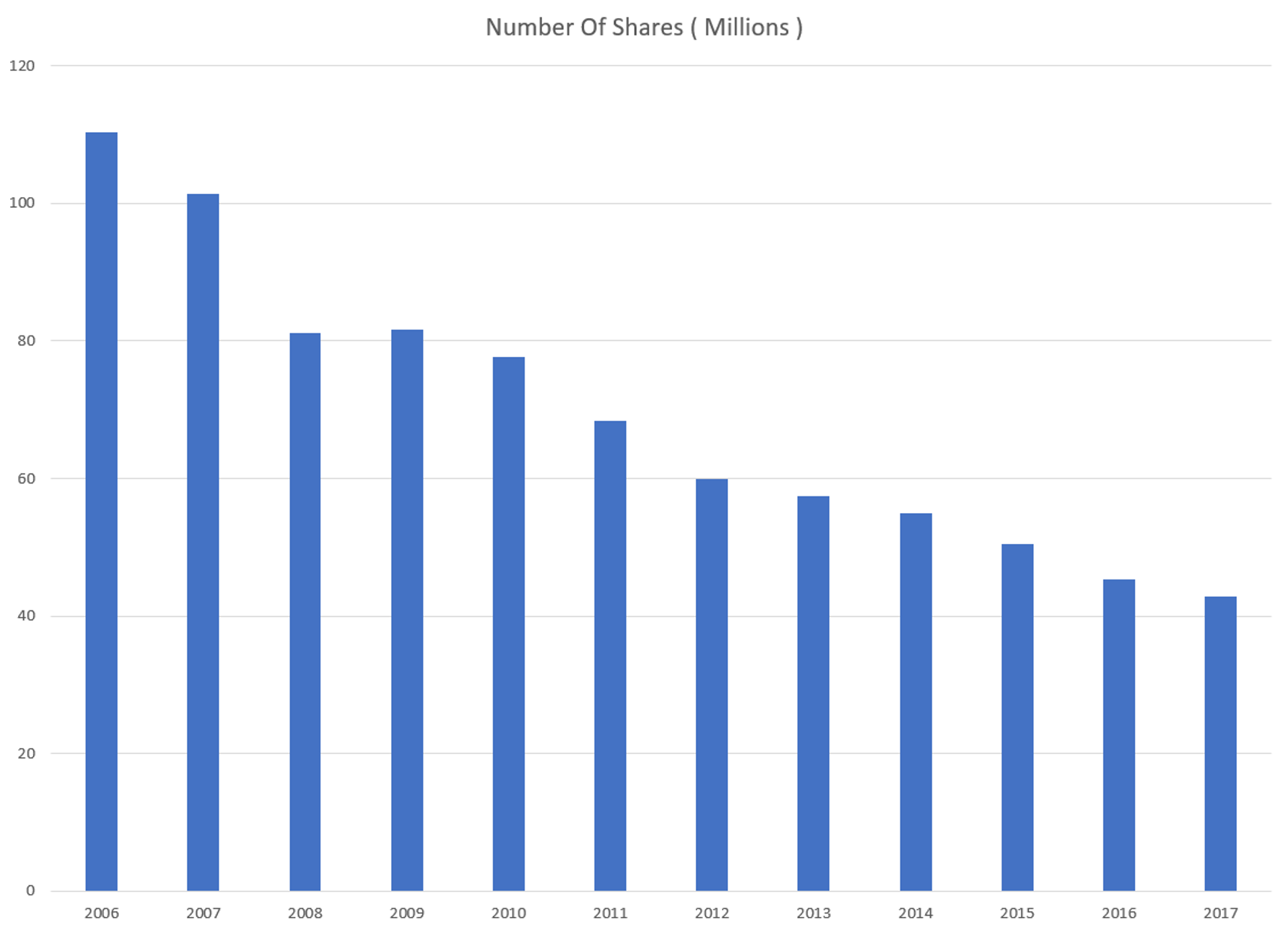 As you can see from the graphs, Big Lots’ consistent share buybacks have transformed a fairly uninspiring set of results into a picture of healthy growth.

Many other companies have been performing the same alchemy. However, they have been doing much of it with borrowed money and to me, that is a recipe for disaster. Big Lots has been funding their share buybacks primarily with the ongoing cash flow from their business. One hopes that they haven’t been scrimping on necessary maintenance capital expenditures, but my hope is that the consistent sales and earnings per store and the stable profit margins over time means that this is not the case. They have a modest debt position. Even throwing in all the miscellaneous liabilities like “insurance reserves”, “deferred rent”, etc. that you find on their balance sheet, I still come up with a net debt figure that is well under three times earnings.

As you can see from the graphs, the company did stumble a bit in the mid 10’s as overhead costs drifted upwards and the company made an ill-fated foray into Canada which they wound down in 2012 and 2013, taking hits to their bottom line in the process. A new CEO took over the reins in 2013 and seems to have turned things around for the better. Unfortunately, he recently fell ill and has been forced to step down to attend to his health. Hopefully the management team he leaves behind can continue the recent string of positive results.

Historically, Big Lots has had a tax rate of around 37%. Trump upended the apple cart at the end of 2017 and slashed the corporate tax rate from 35% down to 21%. This throws one’s earnings projections into a bit of disarray as it is not clear yet how this will shake out in different companies’ bottom lines. In the case of Big Lots, they have said that they intend to spend 30% of their tax windfall on further enriching shareholders through continued buybacks and a dividend increase but will spend the other 70% on boosting the wages and salaries of their employees. Putting this together with a forecast for modest comparable store sales growth in 2018 they come up with projected guidance for 2018 EPS of $4.75 to $4.95. (This compares to actual EPS of $4.43 in 2017 when their tax rate was 36%.)

If we split their earnings projection down the middle and assume a post-Trump tax cut EPS figure of $4.85, that means you are paying 8.4 times earnings for a company that has been growing its per share earnings at a perfectly average rate over the past 10 years, even in the face of a very challenging retail environment. They have a modest amount of debt, a possibly recession resistant business model and the stock comes with a tasty little dividend yield of 2.9%. With the average company currently trading at somewhere around 20 times earnings, this seems like a good deal to me.

I’m buying into the retail apocalypse, hoping that Big Lots will be one of the ultimate survivors in this sector.

Full disclosure: I own shares in this company.