Drifting through the market’s summer doldrums.

One of the wonderful things about value investing is that you don’t have to babysit your portfolio. You don’t have to be up at 6 am to check the latest commentary on CNBC or bring yourself up to speed on overnight developments in the Asian markets. You don’t have to keep your eyes glued to your monitors all day looking for the perfect trades. Once you’ve put together your portfolio of undervalued opportunities, there is often nothing to be done except to sit back and wait. In fact, I’ve sometimes gone the whole summer without checking in on my portfolio. Okay, in truth, I only did that once, to prove to myself that it could be done. But my point is that while it takes careful research to identify your undervalued investments in the first place, once you’ve made the decision to buy, the portfolio mostly takes care of itself. It often takes time for your investment ideas to develop and for other investors to see the potential in the investments that you saw. Hitting “refresh” repeatedly on your broker’s stock quote screen won’t speed that process along in any way.

In these lazy, hazy days of summer, I have been mostly focusing on other projects (landscaping, working on a new deck and supervising the demolition of our hillside to make way for a new and improved driveway). I have not been ignoring the markets completely, though. At the end of a hot day working in the sun I’ve been enjoying relaxing with a laptop and a glass of cider on the aforementioned deck and perusing the investing landscape.

I took a look at two gold mining companies recently. The price of gold has been languishing for the past few years and the price is hovering near the all-in production costs for most gold producers. While this doesn’t necessarily mean that we’re in for a wild bull market in gold, if you’re a contrarian at heart, it does pique one’s interest.

On the suggestion of a reader of this blog, I took a look at Oceana Gold. I didn’t do a deep dive into the company, but my initial impressions were positive. Their main gold and copper mine is in the Philippines but they also have properties of note in New Zealand and South Carolina. Their cash costs are low and it looks like they have opportunities for expansion at their main mine although this could entail a move to potentially more expensive underground mining. Extrapolating from recent results, I get a p:e of around 14. Not being a particular gold bug, though, this wasn’t cheap enough to entice me away from any of my other holdings.

I also took a look at Dynacor Gold mines, a company I’ve followed for a while now. They offer a bit of a different take on the sector, doing primarily ore processing for other companies. All of their operations are in Peru where they have a large processing plant which they have expanded recently. Earnings are slowly rising, reflecting the investments they have made in expansion over the last couple of years and they have grand ambitions to expand their operations first into other South American countries and then internationally. Using my projected earnings estimates for the upcoming year, I get a p:e of just under 10 which is starting to look fairly attractive but again, the geopolitical risk of having all their operations in a developing country is keeping me away for now. Still, this one has definitely made it onto my watchlist.

Speaking of cheap, I’ve been watching the dramatic slump in the price of my WestJet and Linamar stocks with a growing sense of apprehension. Both of these large cap stocks are now trading well into the single digit p:e range. I realise that they both have storm clouds over their heads but they still look awfully appealing to me at these prices. Am I giving them both too much credit? Perhaps upcoming results will disabuse me of my still positive outlook for these two stocks.

Long-suffering value investors can take heart from the following graph that crossed my computer screen recently. It shows the ratio of the MSCI US Value index to MSCI US Growth index. 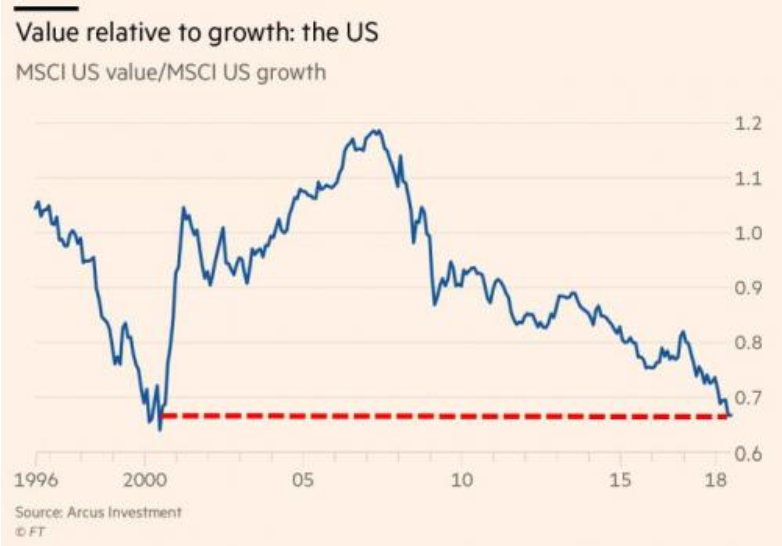 As you can see, value stocks have been underperforming their growth counterparts for over 10 years now. The last time we saw value stocks so unloved relative to the higher priced growth stocks was back in 2000 at the peak of the dotcom mania. Today, technology stocks are once again driving the market higher. And as in 2000, I suspect value investing will once again enjoy it’s day in the sun as overly optimistic growth expectations are brought back down to earth.

In that vein, the negative news seems to be piling up over at growth stock poster child, Tesla. I took a look at Tesla put options to see if I might be willing to put my money where my mouth was (which has been generally shooting off in a negative way concerning this car company), but evidently I am far from alone in being skeptical of Mr. Musk’s ability to steer his company to a safe landing. The price of the put options was high enough that I didn’t seem to be compensated enough for the risk that the Tesla boosters will remain resolute in their support of the stock even in the face of mounting concerns or alternately that Tesla really will surprise the skeptics and become the General Motors of the electric era.

While I did not purchase any Tesla Put options, I still have my S&P 500 puts which let me sleep a little easier at night. I’ve been watching the late cycle indicators slowly pile up which gives me hope that my investment in those S&P put options may yet pay off before they expire in December. The latest graph that got my attention was this one courtesy of Haver Analytics and Gluskin Sheff showing the ratio of corporate debt to GDP. Sure looks like we’re near the top to me. 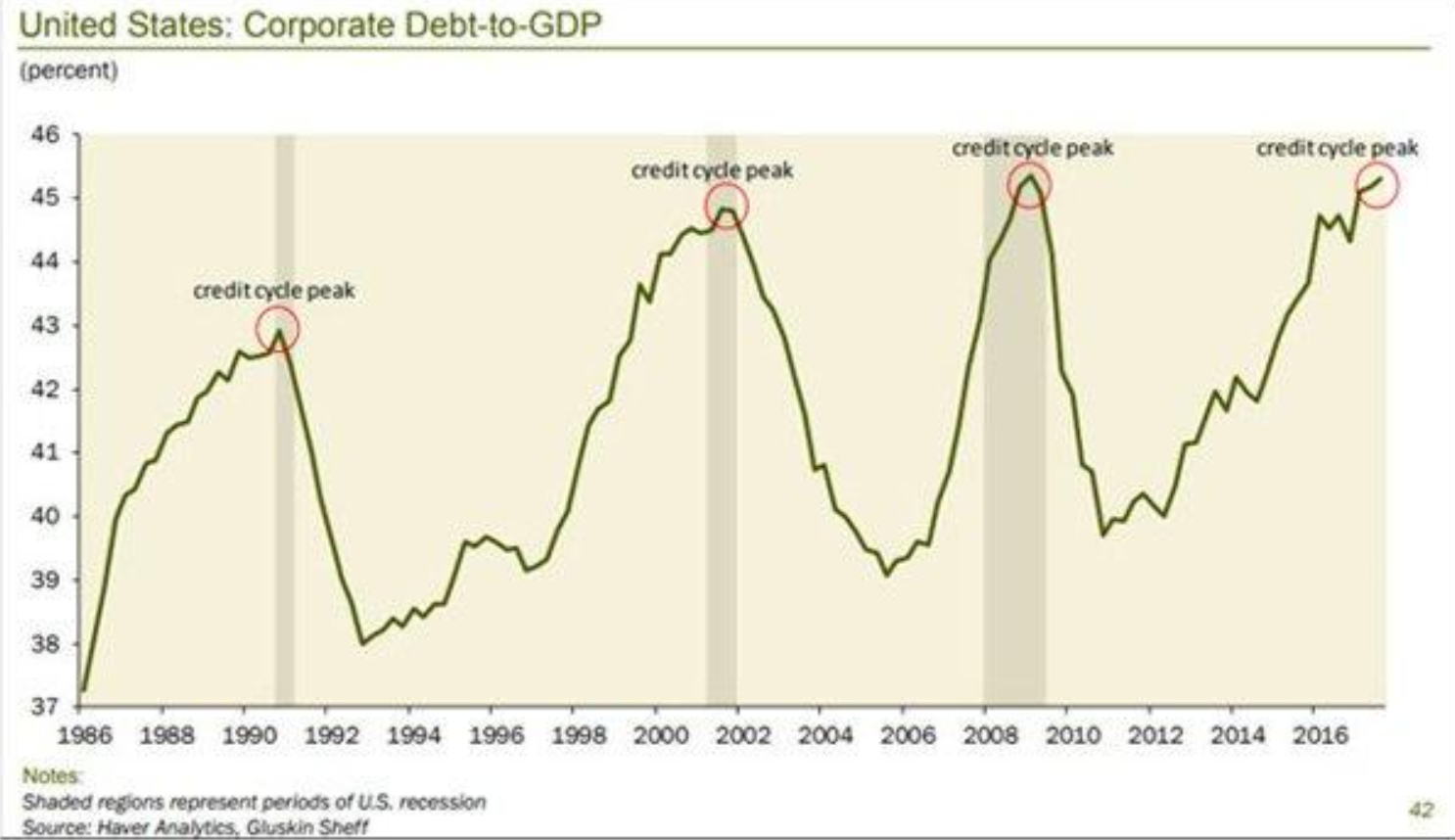 On a more upbeat note, you can always rely on the occasional sprinkling of feelgood news releases from your portfolio companies to keep your spirits up. Magna announced a joint venture in China for the complete assembly of a new line of electric vehicles as well as the acquisition of an Italian head and taillight manufacturer. Rocky Mountain Dealerships came out with a 5 year plan to increase its revenues by 50% to the $1.5 billion mark by 2023. GoEasy is ratcheting up its growth forecasts on preliminary Q2 results which show record loan book growth and declining loan losses. And finally, Macro Enterprises announced the win of another major pipeline construction contract (subject, as always, to the pipeline actually getting built).

Trading in Assure Holdings remains halted and the company keeps postponing the date it will release its updated financials. I can’t say I’m overly optimistic on this one.

While the S&P 500 waffles around in a fairly narrow trading range, other parts of the world have not been so indecisive. I was intrigued recently by headlines saying that the Chinese market was now officially in bear market territory, having dropped by over 20% from its peak. In the past I have done a fair amount of investing in the Hong Kong market so I went back to look at things over there to see if there might be some opportunity. Stocks in Hong Kong do indeed seem cheap on the surface with a median p:e of 12 (vs. 20 in NA). However, this has been the case for a number of years now and the potential for better returns suggested by the lower valuations has yet to be realised. There are a number of negatives which at least partially justify those lower prices.

I took a look at some of the small cap, Hong Kong listed stocks I was following several years ago to see how they had performed over the past 5 years. Out of a short list of 14 stocks, the average price drop over this 5 year period was 38% while EPS for the group as a whole also dropped by around 38%. Youch. I’m glad I wasn’t around for the ride down. Could this abysmal performance spell opportunity, though? At some point, maybe but I continue to watch from the sidelines. I am reluctant to bet on a resurgent Chinese economy at the moment, with all the risks I see looming in the global economy.

I will be leaving the portfolio on autopilot for most of August as I enjoy some travelling with the family but will be back, hopefully refreshed in September and ready to dive into those Q2 reports.

Full Disclosure: I own shares in Westjet, Linamar, Magna, Macro Enterprises, GoEasy Financial, Rocky Mountain Dealerships and Assure Holdings. I do not own shares in OceanaGold, Dynacor Gold Mines or Tesla. I own SPY Put Options.