I recently added this chain of farm equipment dealerships to my portfolio. I feel it offers good value as the sector continues to recover from the downturn of the last few years.

Their farm equipment division is their bread and butter and accounts for the lion’s share of their profits. 54% of the sales in their agricultural division come from new equipment, 26% from used equipment and 16% from parts, services and rentals.

They have steadily grown their operations over time, both organically and through acquisitions, to become one of Canada’s largest chain of agricultural equipment dealerships.

In 2012, they acquired a chain of Peterbilt transport truck dealerships in Saskatchewan and in 2014 they acquired a similar chain of dealerships in Ontario. However, they have had difficulty earning a consistent profit from this division and in 2017 they undertook a re-organization, hiring new leadership for the Ontario stores and doing an internal restructuring. With industry forecasts for improved truck sales in 2018, they hope they can bring this division back to profitability.

Their commercial and industrial division sells construction and forklift equipment. They see little runway for continued expansion in the construction business and have plans to sell off their 4 construction equipment dealerships in early 2018. They plan to hang on to their 8 remaining forklift dealerships.

In 2017, the modest profits from the commercial and industrial division offset the losses from the transport segment such that the agricultural division accounted for essentially all of the company’s net profit. In 2018, they will lose the profit contribution of the 4 construction dealerships they are selling but should gain a slug of cash in return, which could help to pay down debt or fund an acquisition in one of their other divisions.

The agricultural division had a good run from 2003 to 2012, increasing sales by 33% per year and pre tax profits by 22% per year (this from the company’s 2012 annual report). In the earlier part of this decade, grain prices were high and the farming business was booming. Heavy farm equipment is typically sourced in US dollars so the high Canadian dollar at the time meant that this equipment looked attractively priced to Canadian farmers. As a result, there was a boom in buying and an industry-wide glut of new equipment developed.

This all set the stage for a several-year downturn in the industry. The Canadian dollar dropped against the US dollar, making equipment more expensive. Grain prices also settled down and it took time for the glut of new equipment to be worked through. As a result, profits fell. At the same time, Cervus was dealing with its acquisition of the Peterbilt truck dealerships and its expansion of this brand into Ontario where it has struggled to earn a profit. As well, the collapse in the price of oil affected the western Canadian economy and dragged down sales at its Commercial and Industrial division.

From their peak in 2012, profits dropped nearly in half. Notably though, they stayed solidly positive throughout the downturn, and overall sales continued to climb.

At the end of 2017, earnings have largely recovered and there is a sense in the industry that conditions are normalizing after several difficult years. The glut in new equipment has been worked through and supply and demand are becoming more balanced once again. Farmers have had several good years and their balance sheets are looking strong.

After adjusting for foreign exchange gains and losses and the re-organization expenses in their transport division, I come up with an adjusted earnings per share figure of $1.38 for the 2017 fiscal year. This is an improvement over the $0.80 figures I get for 2015 and 2016 and is back up to the level of earnings they enjoyed in 2013.  At a share price of $14.34, that gives this stock a p:e ratio of 10.4.

The acquisition and subsequent expansion of the marginally profitable Peterbilt truck division in 2012 makes comparisons of historic profit margins difficult, but if we look back at the 2011 annual report, before the Transport truck acquisition, when business in their agricultural division was booming, we see that net profit margins in their agricultural division were 3.8% vs. 2017’s 2.6%. While I’m not banking on it, it seems as if there is certainly some possibility of a further recovery in margins and profits if this sector were to start humming again. Total sales in their Ag division have almost doubled from $480 million to $833 million over this time, while earnings have only risen by about 50%, so there could be more room for growth here.

Additionally, the restructuring of their Ontario transport division could bear fruit in coming years. The company remains committed to further growth across all of its banners and is targeting a roughly 50/50 split between organic growth and acquisition-led expansion. While the Peterbilt acquisition has not been overly successful, management says that they have learned valuable lessons that they can apply to future acquisitions. The acquisition of 6 new farm equipment dealerships in 2014 appears to have been more successful and their foray into Australia and New Zealand also appears to have been a success. Of note, they only paid $25 million for the acquisition of 13 Ontario Peterbilt dealerships back in 2014 so while this investment hasn’t paid big dividends yet, they did not pay an arm and a leg for it to begin with.

They carry a large floor plan financing debt on their balance sheet which is necessary to service the large inventory of new and used equipment that they carry. It is worthwhile looking at their inventory levels closely to make sure that they are not building up a growing backlog of unsold merchandise. Looking at the level of their inventory as a percent of overall sales, this does not appear to be the case. Quite the opposite in fact…

Inventory as a percent of sales

In my debt calculations, I have ignored the floor plan financing and focused on the rest of the company’s cash and debt liabilities. After subtracting out their cash balances, I arrive at a figure for net debt of around $2.50 per share which is comfortably less than two times their most recent annual earnings figure. The balance sheet looks reasonably strong and they have untapped credit facilities which could fund a modest acquisition or two if the right opportunities presented themselves.

Tangible book value clocks in at $10.62 per share giving a very reasonable p:b ratio of 1.4 which might provide some support if things turn out worse than expected.

Below is a comparison of the growth in sales, shareholder’s equity and my adjusted earnings calculation. They are presented in a “per share” format and as always, these numbers are subject to human error and should not be relied on without confirming them yourself. 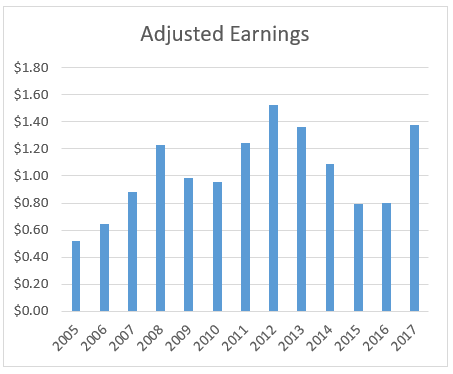 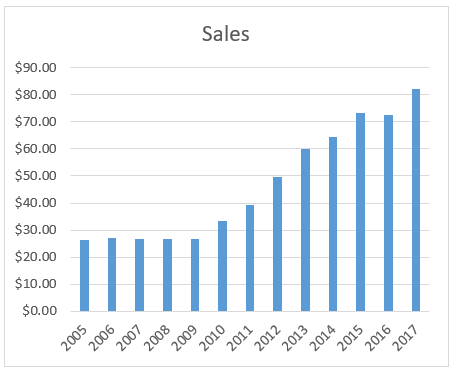 From the graphs, it is clear that the company has struggled over the past 4 years. The reasons are fairly clear and for the most part are due to external industry-wide conditions, beyond the company’s control. However, the company has a good long-term track record of solid growth and indicators are that the agricultural equipment industry is normalizing. Going forward, my expectation is that this company will prove to be “perfectly average”. With the average small cap company currently trading at a p:e of around 19, this company’s trailing p:e ratio of 10.4 offers potentially good relative value.

As well, there is some hope that current profits could still be moderately depressed and that if industry conditions continue to improve, profit margins and profitability may improve as well. Thus, the stock may enjoy some characteristics of a lingering turnaround play. Finally, the outside possibility of above average growth in the future can’t be ruled out. The company has had periods in the past of strong growth and with their international operations, their restructured transport operations, as well as continued organic and acquisition-led expansion, another period of strong growth certainly could develop, which would make the stock look even more undervalued.

Another significant factor in favour of this stock at the moment is their somewhat counter cyclical tendencies. Many experts are saying that we are nearing the end of this current business expansion and a recession could transpire within the next couple of years. The agricultural sector works on its own timeline and is affected by weather and crop conditions more than the ebb and flow of the business cycle. As such, they might continue to enjoy strong profits through a coming recession if the weatherman co-operates.

I think this company looks like a solid, long-term holding. The price is depressed right now, after several years of weak earnings, a difficult industry environment, disadvantageous exchange rates and a difficult acquisition in the transport sector. But the outlook going forward looks more promising to me. Many of the headwinds the company has faced over the last few years may abate or stabilize. I can buy the company now for a reasonable price based on the current earnings profile. And if growth were to accelerate from here, that would simply be icing on the cake.

I own shares in this company.