by mispriced marketsPosted on March 16, 2019

This fashion retailer offers potential value as it continues to grow its online presence and  expand its international footprint.

* This stock is listed on the Nasdaq market in the US. All prices and figures mentioned in this article are in USD. 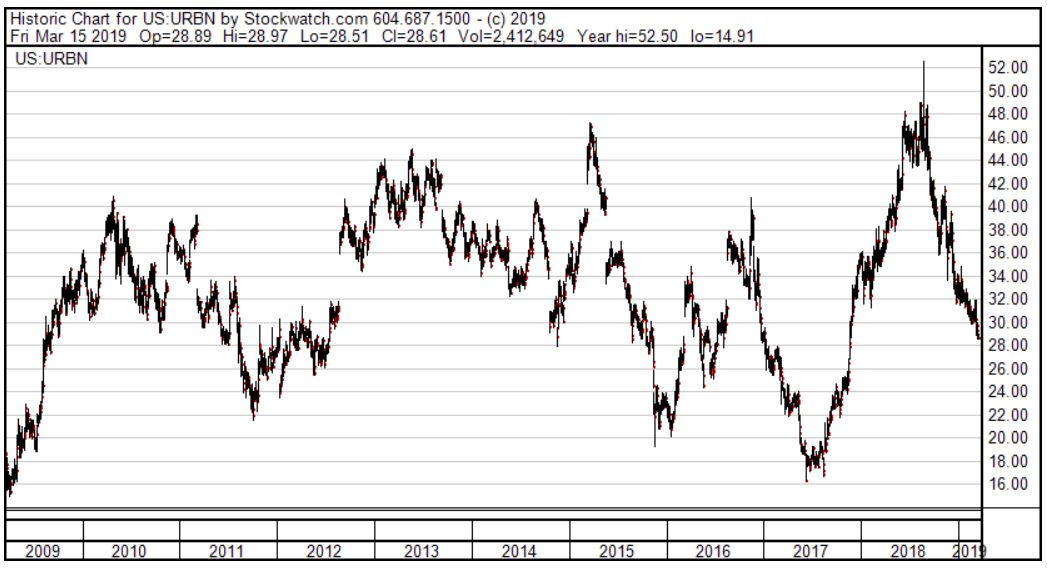 Urban Outfitters is an apparel retailer which operates under 3 main banners: Urban Outfitters, Anthropologie and Free People. Their network of mostly corporate-owned stores spans the United States, Canada and Europe, with a handful of franchised outlets in Israel. Their stores offer a fun assortment of both apparel and “apartment wares” which include such things as rugs, pillows, shower curtains, candles, books and novelties. Apparel accounts for about 70% of their total sales with apartment wares, accessories and other miscellaneous items making up the rest. Their original Urban Outfitters concept is aimed at young adults aged 18 to 28. Anthropologie takes up where Urban Outfitters leaves off, targeting women aged 28 to 45 while Free People targets the 25 to 30 demographic. Domestic US sales make up the bulk of their operations but they have also expanded into Canada and Europe. While they feel that they are near the market saturation point domestically, they still see plenty of room for growth in Europe where, as of the end of Q3, they owned and operated only 60 stores vs. 550 in North America. They also run a wholesale division, selling their branded merchandise to more than 2100 department, specialty and online retailers worldwide.

They have made great efforts over the years to develop their omnichannel strategy through which they aim to seamlessly integrate their physical stores with their mobile, catalog and web-based sales. You can visit a physical store, order your size in a shirt you like from your mobile phone and the company will ship it to you from either their centralised fulfillment facility or, in some cases, another local store. If you don’t like the fit, you can then return it to the local store or ship it back to the company by mail. Their online sales have been steadily growing at a double digit rate and now make up over 40% of their total retail sales. They have been ranked as one of the top online retailers in North America. In the quarter just ended, robust growth in their eCommerce sales helped to offset weakness in their physical store traffic. With further plans to invest in their distribution capabilities in the coming year, they demonstrate a continued focus on their digital operations. They say they have seen exceptional growth on the online Tmall Global platform in China and plan to launch on the larger and more heavily trafficked Tmall Classic platform this year.

Back in the real world, they see untapped potential in Europe to expand their physical store presence and will be making significant investments there over the next few years. With the uncertainty over Brexit and the weak state of the European economy, they are seeing attractive lease opportunities appearing for new store locations.

Fiscal 2019 (their year ends January 31) was a very good year for Urban Outfitters with record sales and earnings. After a difficult 2018 which saw profits stumble due to increased delivery and logistics costs necessary to support their online sales, profit margins recovered in 2019 and strong consumer sentiment helped keep sales strong.

The recently completed Q4 saw this momentum continue in November but then weaken in December and January as consumers reined in their spending. This weakness has apparently continued into the current year and the company disappointed markets with weaker guidance for the upcoming Q1 where they say we are likely to see a decline in sales and earnings when compared to the previous year.

Whether this trend continues into the rest of the year very much depends on the future direction of the economy. Somewhat encouragingly, though, if we look back on the company’s performance during the last recession, we see that sales and earnings remained healthy throughout this downturn.

The company has stated that they think they have reached the saturation point in their domestic, US market. Over the last 6 years they have kept their store count fairly steady, shutting down underperforming stores and opening new ones only where the economics make sense. They have been expanding their presence in Europe but at a very cautious, measured pace. Excess cash flow has gone into buying back shares and this has been their main source of growth since the end of the last downturn.

Over the past 6 years, sales per share have grown by around 11% annually while pre tax earnings per share have grown at a less exciting 5.5% as profit margins have dropped, sensitive to the same downward pressures that have been plaguing much of the retail industry. While not overly exciting, these kinds of growth rates, in a very difficult retail environment, I view as reasonably robust.

Following is a record of the company’s sales, tangible book value and as reported earnings, all on a per-share basis. The company is projecting a tax rate of 25.5% for the coming year and this is the figure I used in my adjusted EPS figure to help smooth out the volatility arising from the recently fluctuating corporate tax rate in the US. Using this theoretical, adjusted EPS figure I calculated a matching theoretical profit margin assuming the tax rate had been 25.5% every year previously. 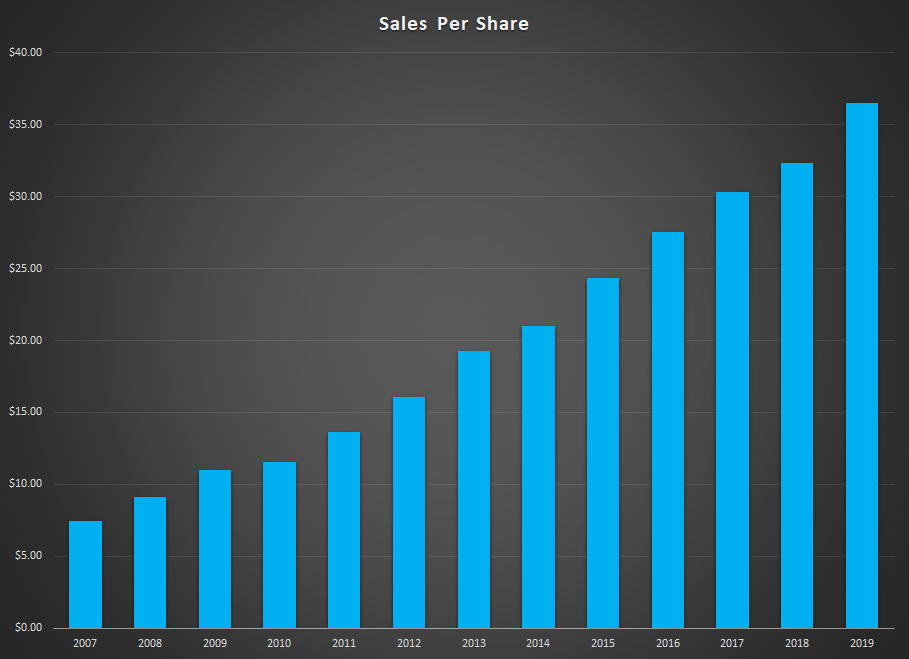 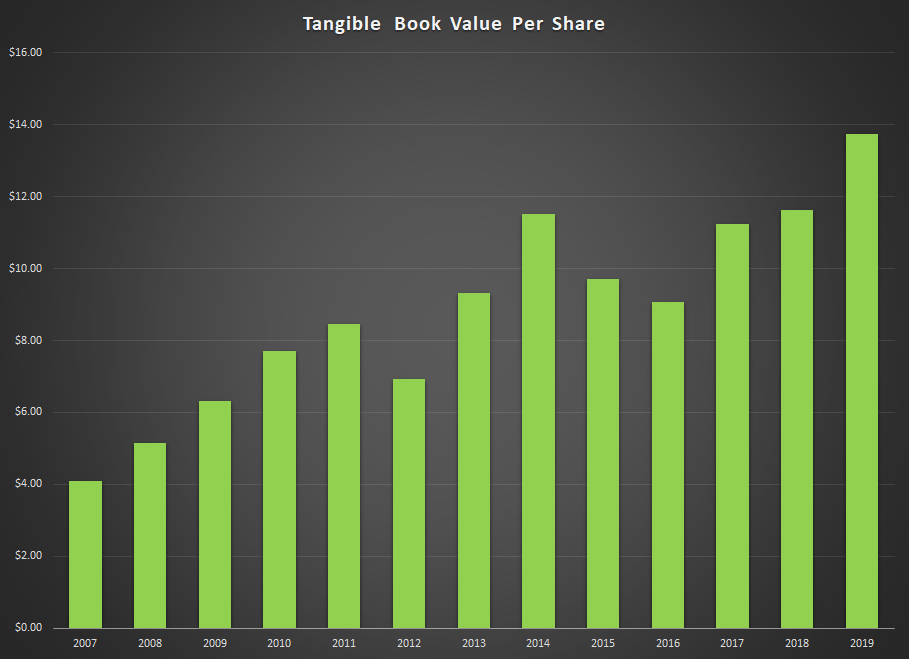 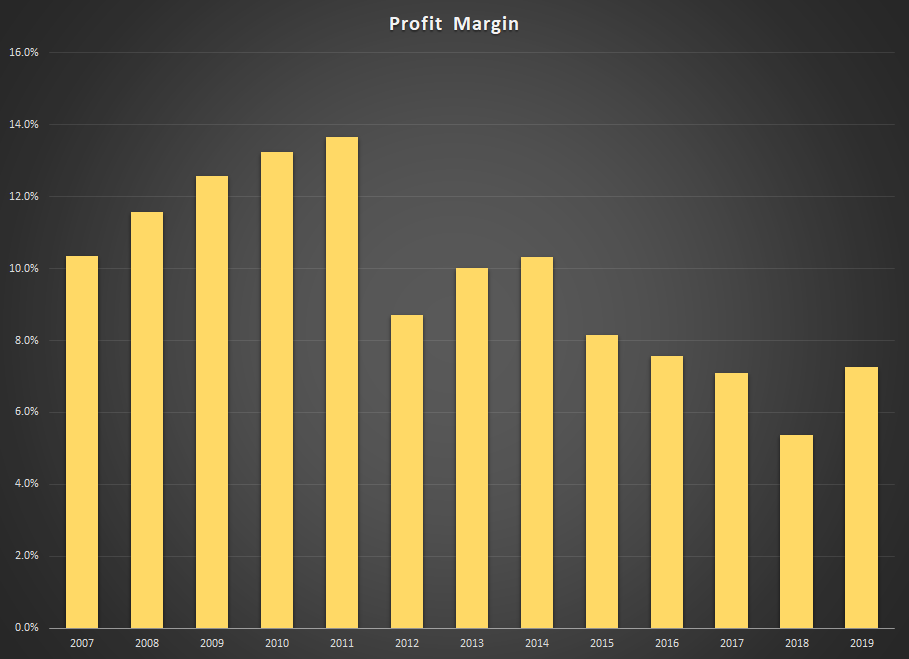 At the latest closing share price of $28.61, and using the as reported EPS of $2.75 for the latest fiscal year, Urban Outfitters has a compellingly low p:e ratio of 10.4. Given that the average stock in the US is trading at over 20 times earnings, this seems like it could offer us a good value-priced entry point into one of the country’s leading apparel retailers. Admittedly, 2019 was a strong year for the company and given the guidance for a weaker Q1 around the corner and a slightly higher projected tax rate for the upcoming year, it is quite possible that EPS might not be quite as robust in 2020. As well, the company is planning to spend more heavily on its European expansion next year and will be investing further in its distribution capabilities. These initiatives are likely to come with higher costs. If the economic slowdown that seems to be materialising picks up speed, this is likely to further pressure profitability. All this could lead to reduced earnings in the near future. However, with a trailing p:e ratio that is sitting at around half the level of the average company, much of these concerns are already priced into the stock. I don’t believe this company merits that sort of discount.

US retailers have been hit hard by the growth in eCommerce and the heavy costs involved in re-tooling their operations to meet this online threat. Urban Outfitters has been hit by the same pressures but has made a great effort to meet them head-on. They have limited the size of their physical store network, concentrating on retaining the most profitable stores in their network and closing down less successful locations. They have kept their balance sheet strong and are currently carrying almost $6 per share in cash and no bank debt. And they have been investing in their online, “omnichannel” strategy, ensuring that their products are available to their customers across a wide variety of online and offline channels.

They performed well through the last recession. Although results seem likely to deteriorate if we move into another full-blown recession, at these prices, I think this is a good place to buy into a well-run retailer with a long track record of profitability and multiple future areas of expansion open to it.

Full Disclosure: I own shares in Urban Outfitters.