by mispriced marketsPosted on September 10, 2019

After watching from the sidelines for the past year, early signs of a turnaround convinced me to take a chance on the recovery of this once promising apparel retailer. 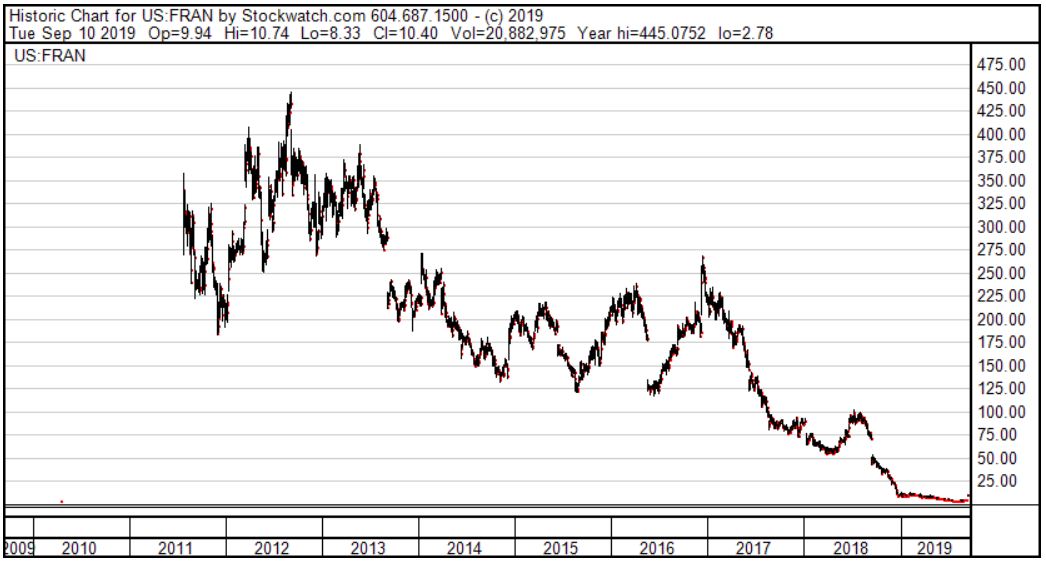 Francesca’s is a chain of 718 boutique apparel stores spread out across 47 states. They target young women ages 18 to 35 with a constantly changing assortment of fashion apparel, jewellery, gifts and accessories. Their stores are quite small by retail standards, averaging less than 1500 square feet. This is one of their unique attributes. Their small size means they can squeeze into unusual places and can take advantage of lower priced, awkward-sized real estate opportunities. Their small size also dictates a “broad and shallow” merchandise assortment. They stock a small number of items in a limited range of sizes. Their goal is to offer up a constantly changing assortment of new items to “delight and surprise” their customers, bringing them into stores frequently to find out what the latest is that Francesca’s has to offer. They try to respond quickly to changes in fashion trends, with short lead times of 4 to 12 weeks between when they place the order and when they have the merchandise in their stores. Their eclectic mix of clothing and miscellaneous impulse gifts and accessories adds to the fun factor.

Their model was working brilliantly for them up until about 3 years ago. Sales and profits were growing quickly, and the company was rapidly expanding its store count. Over the 7 year period from 2010 to 2017, the company grew its sales per share at a rate of 22% per year. Then they hit a wall.

In 2018, comparable store sales were down 11% and profits fell in half as the company continued to invest in new stores, new and improved back office systems and continued to add personnel even in the face of declining sales per square foot. Things went from bad to worse in 2019. Comp store sales fell by another 14% and expenses continued to rise as the company did a remodel of 81 of its highest traffic stores. The company hemorrhaged money in the year ended Feb 2019, losing over $40 million. Even ignoring a $20 million asset impairment charge, the company still managed to part ways with over $20 million in fiscal 2019. That works out to around $7 per share. The company looked like it was heading straight for bankruptcy court and the share price fully reflected that. From a high of over $400 on a split adjusted basis, the stock had sunk to less than $4 a share by this summer.

I started getting interested in this company about a year ago, back when the share price was several times higher than it is today. I visited a few stores and was impressed by what I saw. They were well-kept and new looking. I didn’t see any cobwebs in the corners or odd-looking stains on the floor. Not being an 18 to 35 year old, woman I couldn’t be sure, but the assortment of merchandise on offer seemed to be fun and different. There were other shoppers in the store, and they were actively browsing through the merchandise. It seemed like there might be something here worth salvaging.

But the company was losing money. Lots of it. And those comp store sales numbers kept dropping in gut-wrenching increments. The company seemed to be in free fall. I don’t mind trying to catch a falling knife from time to time, but this one looked awfully sharp. So I held off, and continued to watch from the sidelines.

This morning, the company released its second quarter results and the alert was in my inbox when I fired up my email account over breakfast. Finally, here was a bit of good news. Comparable store sales continued to decline, dropping 5% when compared to a year earlier, but the rate of the decline was slowing. What’s more, the company actually managed to turn a profit in the quarter. Once you adjusted out all of the non-recurring expenses for the quarter, you got EPS of around 50 c (assuming a tax rate of 26%). Nothing like the profit they were earning a few years ago, but it was a start. At this point, any profit would make the stock look good.

There is a new management team in place at Francesca’s. The previous CEO, CFO and chief merchandising officer have all abandoned ship. A new CFO has stepped in and they have an interim CEO in place, a stand-in with experience in retail private equity. They are on the hunt for a permanent CEO and a new merchandising officer. Meanwhile, the interim CEO has put together a very credible sounding plan for turning this company around. He is focusing on several key areas. The first is merchandising, where Francesca lost its way. They stopped selling what their customers wanted to buy and the 25% decline in sales per square foot reflect that. Encouragingly, their inventory levels have not ballooned over the past few years. The company has been aggressively marking down and clearing out old inventory and this will hopefully bode well for a fresh, new assortment that will appeal more to their customers.

The next component of their turnaround strategy is to cut their bloated expenses. They have targeted $15 million in annual savings for 2020 and have made good progress already in implementing these cuts. They are also focused on increasing their boutiques’ productivity by scheduling tasks that used to be performed outside of normal business hours to quieter times of the business day. Finally, they are actively working on improving their real estate performance by shutting down underperforming stores and renegotiating leases where they can.

The stock is now trading at a steep discount to its tangible book value. What’s more, that book value may severely understate the actual value of the company’s assets. The average new boutique costs the company $319 000 to open but if you divide their stated book value as shown on their financial statements by the number of boutiques they have in their network you get a value of around $100 000 per store.

Despite continued aggressive markdowns in Q2, and a generally weak retail environment, the company still managed to post a healthy profit in this latest quarter. Seasonally, Q2 and Q4 are their strongest quarters and Q1 and Q3 are a little weaker, but the seasonality is not nearly as pronounced as it is with most retailers. Before the wheels came off the bus, they typically managed to report healthy profits in each of their year’s four quarters. However, last year they also recorded a slight profit in Q2, only to go on to lose money hand over fist in the next 3 quarters. I am hoping that this time may be different. That the company, with its new management team, renewed focus and turnaround strategy in place might manage to continue to post profitable quarters more often than not and ultimately will get back on track to a partial or even full recovery.

The potential upside with this stock is enormous. 3 years ago, the company was earning a consistent profit margin of 10% or greater. This is at the top end for the retail sector and reflects a company that is firing on all cylinders. If by some small miracle, the company was able to regain its lost glory and was able to once again produce profit margins of 10%, you’d be looking at EPS of $14 using the current revenue figures. The stock is currently trading at around $10, implying a p:e using these optimistic “peak” earnings of less than 1. If everything were to go right, a 10 or even 20 bagger is not out of the question with this sort of pricing.

A more realistic scenario would call for a gradual recovery to more modest profit margins of 3% or so. That still offers up the potential for EPS to hit $4 sometime in the next few years. A 5 bagger on these sorts of results would be completely plausible.

The stock is currently trading at less than half of tangible book value with close to $12 million or $4 per share in net cash. If the company can simply stop losing money, then I’d hope it would trade at least at par with its own book value. Book value which I believe is understated.

There are still big risks with buying into this company now. It is very early in their transformation and there is no guarantee whatsoever that they will be successful. They need to reconnect with their customers and offer them merchandise that excites them and draws them into the stores. Currently they have no chief merchandising officer and are actively hunting for one. They say they are focused on improving their fast fashion offerings and bringing in new and exciting inventory into their stores but who knows if they will be successful in doing this. Their turnaround efforts could easily get derailed again by a full-blown recession or by punishing tariffs. They have some financial firepower on their side with $12 million in net cash, but this will evaporate quickly if they go back to reporting the kinds of losses they did last year.

In short, this is a high risk, high reward type of scenario. The stock could move up by multiples of its current price if their turnaround efforts are successful or it could crash and burn, ultimately expiring worthless. Both options are on the table right now. I’m rooting for the former.

Full disclosure: I own shares in Francesca’s Holdings.