I recently added this chain of sporting apparel and footwear stores to my growing collection of beleaguered US retailers. 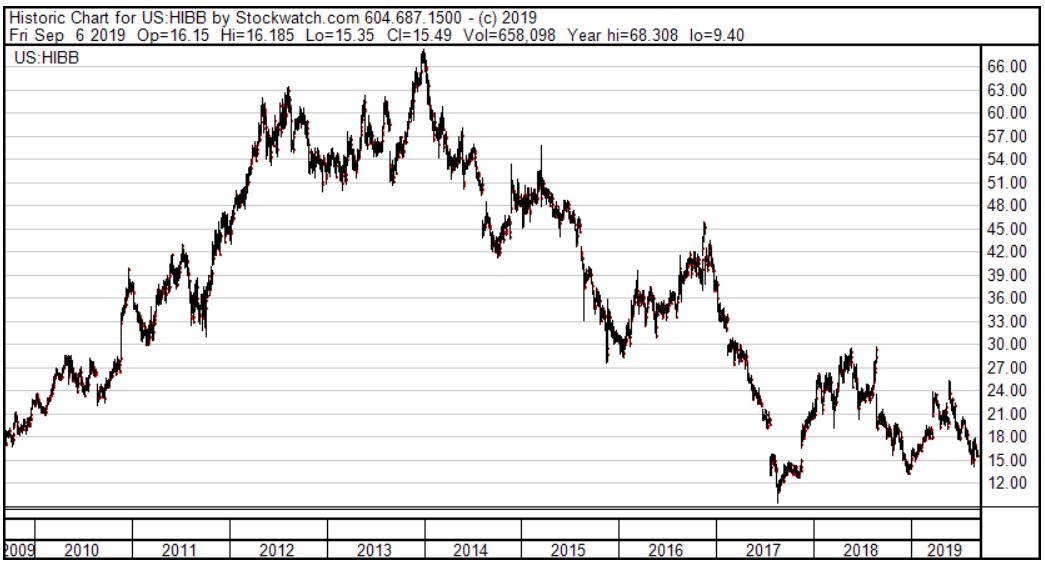 Down But Not Out

Hibbett Sports operates a chain of stores offering athletic footwear, apparel and sporting goods. They have 1,144 mid-sized stores spread across 35 states. Most of their stores are located in strip malls in smaller towns and cities. In November of 2018 they acquired City Gear, a smaller chain of footwear and apparel stores with a more urban focus. Without a lot of geographic overlap, they see strong potential in the new acquisition for synergies, savings and growth as they apply the best practices of their successful Hibbett brand to the new City Gear banner and expand it into new territories.

As with many retailers, they have been struggling with the rise of online shopping and widespread over-capacity in the retail sector. After two solid decades of strong growth, EPS fell by roughly 50% over the last several years. The stock price responded in kind, falling by 75% from its peak, as the market priced in continued pain ahead. The former CEO recently announced his retirement and the CFO has taken the opportunity to move on as well, leaving a possible vacuum at the top. With the huge uncertainty caused by the recent trade war with China, which threatens to impose potentially punishing tariffs on imported apparel and footwear, the market’s apprehension is understandable.

However, as always, adversity can create opportunity. I believe the situation at Hibbett may not be as bad as it appears. The company is in strong financial shape. Even after their acquisition of City Gear last year, they remain in a comfortable position with no net debt and cash in the bank. Their inventory levels are well under control with no evidence that they have obsolete merchandise building up in their stores. The company performed well during the recession of the early 2000’s and the meltdown of 2008. Prior to their recent stumble, they had a long run of impressive growth. From 2000 to 2016 the company grew its earnings, sales and book value per share by over 13% per year as they expanded their store footprint across the country.

The company is down, but it may not be out. On an adjusted basis, factoring out non-recurring expenses, earnings improved in the first and second quarters of this year when compared to last year. Many retailers, including Hibbett, are reporting that back-to-school sales are starting out on a positive note. Hibbett is closing down 95 under-performing stores this year and are busy integrating the new City Gear acquisition. Both these initiatives could bear fruit in future quarters. As well, their eCommerce division continues to grow as they develop and refine their omni-channel strategy.

With a trailing p:e ratio of 7 and trading just below tangible book value, this company could offer significant upside. The near-term risks and headwinds are obvious but looking further out, a potential recovery in profit margins, further expansion of either of their two store banners and a rising valuation could combine to provide a strong lift to the stock price and end up surprising the doubters.

Full disclosure: I own shares in Hibbett Sports.